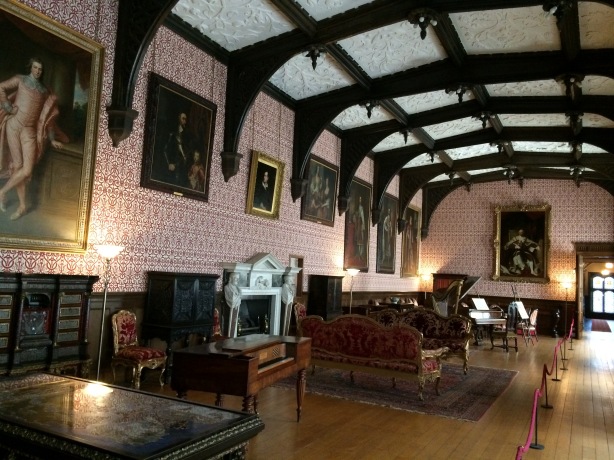 In 2016, I had the pleasure of visiting Newstead Abbey, the property that Lord George Byron inherited from his great uncle in 1978, when George became the sixth Baron Byron.  Byron was a colourful man, and led a life full of intrigue. I had read his work and read letters and stories about his life, but I went to his home to seek more inspiration. He is of course the perfect draw for storytellers, when you are seeking ideas for captivating characters. That is why I went to his home, because I wanted to be able to touch on his life and discover what it was really like rather than just read about him in books. And oh my gosh, I am so glad I went there, because I walked into room after room of inspiration.

As most people know, Byron was a lover of the macabre and Newstead oozes that in a way that made me wonder what came first, the house he inherited or his love of gothic style games. Of course, you can tell from the name, that the property was previously a medieval abbey. What Byron inherited was a tumbled down medieval ruin that had been rebuilt into a Tudor manor. This is probably easier for me to imagine than it is for others to see  because Newstead Abbey has had many later amendments to its layout. But Lacock Abbey, which is just up the road from me, was also converted from an abbey into a stately Tudor home, and that is still very much as it was in the Tudor period. 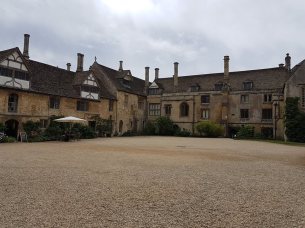 However at Lacock some of the ruins have been kept in place underneath the Tudor house, so you can still walk about the nuns’ cloister in the middle of the property and in and out of great arched rooms that were once kitchens, storage rooms and the chapter house with its wallpainting and medieval tiles still in situ. At Newstead some of the outer ruins have been preserved . Below you can see the magnificent arch of an old abbey window, that was kept as nothing else but a piece of artwork in the gardens. The arch is not even the entrance to the garden; that is through a very small door to the left.

In Byron’s day, the stairs were at the front here, though, and the steps went up to the first floor, so the door opened in to what was once the Abbey’s great hall, where the monks would have dined with any travelling pilgrims as guests. Lacock does still have it’s steps that lead directly to the great hall.

The other abbey that has stuck in my mind, as another property sold off by Henry VIII to his nobility from them to turn into a house, is the home that belonged to Jane Austen’s family – Stoneleigh Abbey. At Stoneleigh the entrance directly to the first floor has also been removed, but it’s Jacobean wing gives another context to help you imagine how Newstead would have looked in Byron’s day. Byron’s house also had a newer wing, which he used for guests.

Byron did not inherit much money to accompany his title, and so he could not repair and redecorate the house to any great extent. But he did choose a few small rooms to make a bit more luxurious. Today the other rooms have been changed and completed by the owners who have lived in the property since Byron’s day, but the rooms Byron had decorated are still very much as they were. 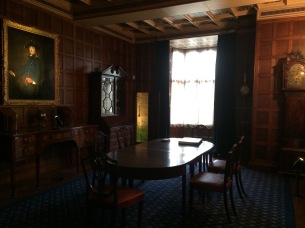 The study. Where he wrote when he was at home. 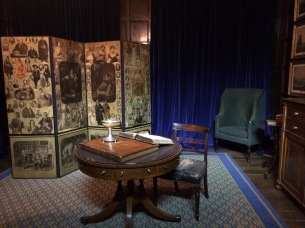 The library, where the goblet he had made from a skull he had found in the gardens was kept. It is only a replica on the table, though. The wife of the man who bought the property from him had it destroyed. 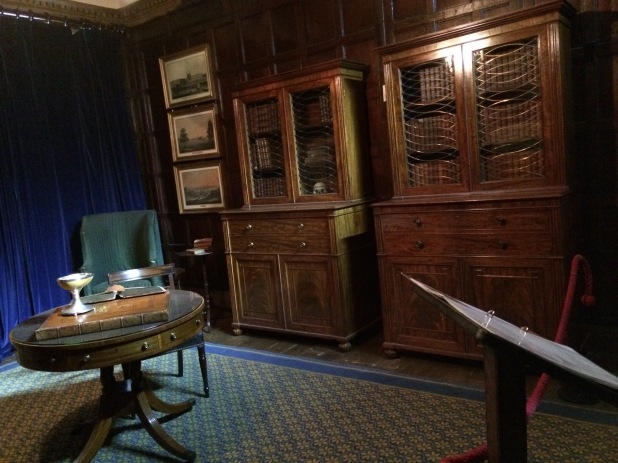 A cellar in the undercroft of the Abbey, beneath the great hall, where he had a table and chairs put out to host small parties, for his friends and female guests. 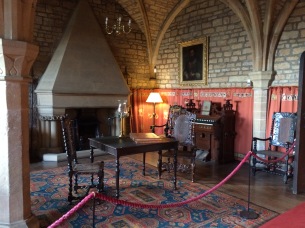 Lastly his bedroom, which contains the bed he had brought to the Abbey from Cambridge. 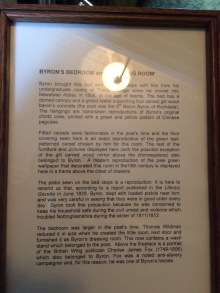 The room Byron decorated for himself was in the medieval area of the house, on the opposite side of the house from the Jacobean wing that his guests used (and am I guessing where his mother lived as she shared the house with him and looked after it when he was not there).

To reach his rooms the passages are narrow, climbing up spiralling stone medieval staircases with leaded, small windows cut through the stone, that leave passages cold and shadowy. 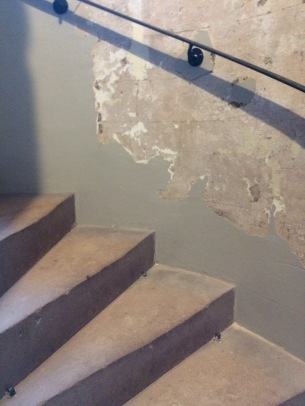 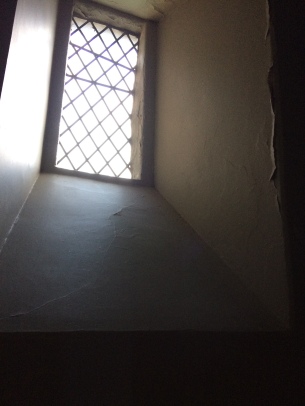 There is one example of what the rooms that Byron was unable to renovate would have looked like at the time, (and felt and smelt like – which is why I like going places because pictures only let you experience one sense). This room was Byron’s dressing room. Image the large hall below in the same state then… 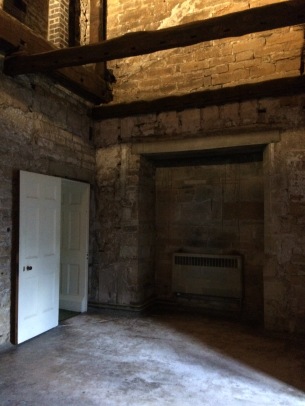 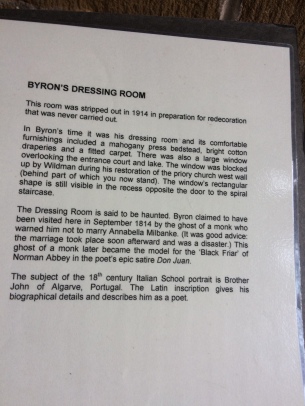 If you have already read The Thread of Destiny I am sure you can now see whose house this is in the book. The great hall had its roof replaced and the room was redecorated by a later resident, but in Byron’s day it was where he used to fence and shoot.

Byron used his house as a playground, but he also used the vast grounds that surrounded the Abbey to play in. He kept a pet bear and entertained the bear (without a leash) in the grounds, even playing blind man’s buff. On one side of the grounds is a large lake, where his Great Uncle (who I think was just as eccentric as Byron) used to have mock naval battles with real boats. Byron loved his dogs, and he swam in the lake everyday when he was at home. One game he used to play in the lake with one of his favourite dogs, was to throw himself into the lake instead of a stick to get the dog to drag him out. (My George’s follies are ideas from elsewhere, though, Byron’s uncle was not much of a folly man).

At the back of the house are beautiful formal gardens. 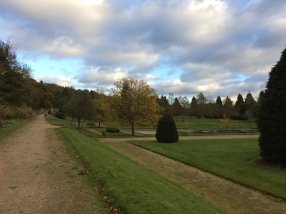 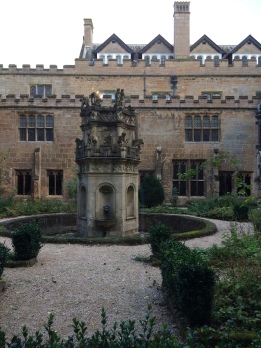 Many other inspirations for the stories in The Thread of Destiny and The Lure of a Poet come from Newstead Abbey, because there is a fabulous area there that has been set up as a museum of Byron’s possessions. In the pictures below are just a few of things that made me think of elements of the stories that have become the first books in The Wickedly Romantic Poets series. 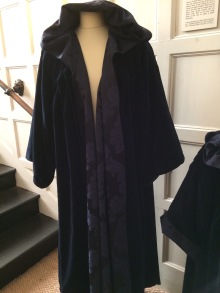 The story in the first of my new books, The Thread of Destiny,  begins at the home of my George, Bridge, Lord Bridges, The Duke of Stonemoor, and as his home is very much as Byron’s was, his character is also very Byronesque. – and how wonderful to be such an exceptional character during your lifetime that a word is created to describe the essence of the personality shown by your life and your work.

There will be lots more reality based behaviours from my poets in the rest of the series that will be out in 2019. 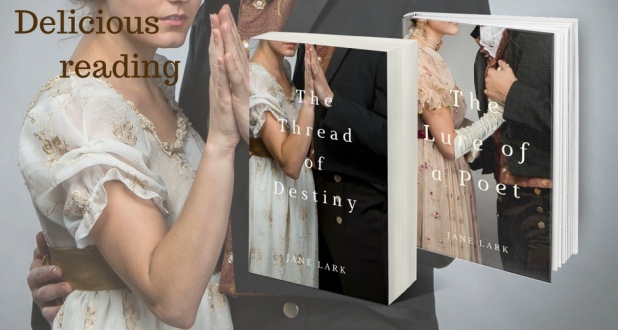 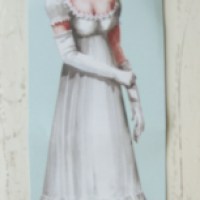