Before I share the next part of Geoff’s and Violet’s story, I just want to say, “Thank you.”  to anyone who bought The Illicit Love of a Courtesan this week, or ever left a review, because those two elements were the things that saw it rocketing up the US Kindle chart this week, it hit number 22 and became the No.1 bestselling Historical Romance novel in America for three days. An amazing experience, to see that happen, having worked so hard for the last few years. “Thank you!”

But anyway. Forget that. Now it’s time so share the next chapter in A Lord’s Desperate Love. 🙂

It meant another restless night in the inn. Yet his heart suddenly flared with warmth as hope surged in – he’d see her tomorrow. Tomorrow. If this woman was her?

It had to be her.

Mayer? He was sure the name had some connection to her. He knew it for some reason. But why would she change her name, and why go by Mrs and not by her title?

What or who was she running or hiding from? Him?

All he felt inside was confusion.

His boot slipped on the cobble, making him stumble, but he didn’t fall. He slowed his pace. The mist was clinging to his coat and in his hair. All he could really see was the ground beneath his boots and an eerie glow reaching through the murky grey from any lights burning in the shop windows as he walked further up Queen St. He turned into Quiet St, his hands curling into fists in his now damp greatcoat. Lamplight shone through the grey, drawing his eyes to a small jewellers shop on the left. The shop attendant was busy lifting trays of rings from the window.

A deep seated need pulled Geoff toward it and he pushed the door open. A bell rang above it. The shop assistant, who was leaning over slipping trays into drawers, looked up sharply, then straightened. “We are just closing, sir.”

“My Lord,” Geoff corrected, “and I am just going to make a purchase. You’ll stay open. I want a ring, an engagement ring.” When he found Violet, he was not letting her escape again. She would know how he felt if he had already thought of this.

“My Lord,” the man acknowledged bowing slightly, and then he bent down again and lifted a tray from below then placed it on the shop counter.

“I want sapphires. She has blue eyes. Sapphires and diamonds.”

The shop assistant lifted one eyebrow but bent again, then set another tray beside the other. “Their maybe something here you like, my Lord.”

Geoff scanned the rings nestled in midnight blue velvet. They glinted at him all calling to be picked. Ruby, emerald… Sapphire. He knew most of Violet’s jewellery was sapphires. Sapphires must be her preference.

A ring stood out. The gold was woven like threads with blue and clear stones shining from between the strands. Sapphires and diamonds. He picked it up. It was tiny to his large hand.

A memory of once playing with one of her rings, crept into his thoughts. It had been a long time ago, just after he’d met her, when she’d seemed like an ethereal being, all testing, brash confidence and beauty.

He slipped the ring onto the tip of his little finger and tried to visualise the comparison to when he had done the same with one of her rings. It seemed a similar size.

It had to be the choice. The one meant for her. It would fit perfectly.

The attendant set it in a velvet bed, in a leather box, and passed it to Geoff as Geoff handed him the money.

When he’d tried one of Violet’s rings on, it had been the first night he’d slept with her. He walked back to the inn through the mist, remembering that night.

She’d propositioned him. He’d been looking. But she’d spoken.

She had walked past him and run her fingertips across his midriff. Then across the room she’d fluttered her fan and looked over the top as he’d stood transfixed for an age.

She was stunningly beautiful.

When he’d made no move after an hour she’d worked her way about the room, stopping here and there talking and laughing, and then she had walked up to him.

Her fan had snapped shut and then she had tapped his arm, and she’d said with a seductive smile and a glint in her eyes, “You look like a man who enjoys his entertainment, Sparks. I bet you play a good hand. Do you fancy a game?” Of course she had not been speaking of cards.

His heart had thumped as he’d answered. “Where?”

“My house I think. I do not fancy your bachelor apartments.”

God he could still remember the sudden heat which had burned in his veins and the weight in his groin at the very idea.

She was bold and domineering, and he had been bloody devoted.

In the carriage she had not let him touch her or kiss her, all the time building a burning tension between them.

He’d been constantly aware of where her hands were. When they’d brushed the fabric of her dress he’d felt a tremor run through him.

He’d been even more aware of the lift and fall of her bodice as she’d breathed, while she laid out the rules. “You are not to read any favour into it, Sparks, you understand…”

He’d nodded, not giving a damn, just thinking of lifting her bloody skirt. He’d heard how good she was, rumours about her had circulated men’s clubs. He knew others she’d been with, and no one ever complained about her rules.

“I wish to be treated well, Sparks. I do not expect to be looked at as if I am your discarded linen after this.”

He could remember smiling at that. She could hardly be compared to dirty linen, she was the most beautiful creature he’d ever set eyes on.

“We are equals in this, I do not wish you plying me with prose or…”

She had rambled on the whole way, drawing lines in the sand he wasn’t supposed to cross. When they’d reached her house he’d climbed down first and offered his hand. She’d accepted it, her small fingers clutching his. They were so delicate.

They’d had a nightcap and then he’d thought it time to take the reins from her hands. He’d lifted her glass from her fingers and covered her mouth with his to shut her up. Violet. He ached to kiss her now as he remembered.

That first time had been sheer bliss. It had never been the same with other women, and he’d had other women before and after. There had been several casual liaisons since, but none quite like the first. She had been fire and ice, and earth and wind that night.

The first time he’d taken her had been on the floor in her drawing-room, with a fire blazing beside them, its light warming her skin and turning it amber. But before he’d got that far she had been on her knees worshipping him in a way a decent woman should not, her fingers running over his torso and brushing over the hairs on his thighs like she simply could not get enough of him.

When he’d pressed into her heat, an uncontrollable hunger had ripped through him, and he couldn’t get deep enough or work fast enough. It had been excruciating, delicious, blissful pleasure. He’d driven into her like an unleashed animal and she’d cried out as her fingernails clawed into his skin. He’d made her break numerous times, with her thighs gripping his hips and the breath of her cries caressing his neck.

His coming had been something monumental but not the end of their first night. Their second encounter had come after half a bottle of wine, which they’d shared lying naked before the fire. It had been in a chair. He could still feel her sitting astride him and undulating in a rhythm which had enthralled. His fingertips had pressed into her thighs, while she had bitten his neck.

There had been a third time. In the morning. In her bed. That time had been achingly slow and beautiful and he’d felt the tremors of her pleasure racing through her body as he’d touched the skin covering her ribs and seen in the daylight just how beautiful the magnificent woman was.

She’d bathed while he’d languished in her bed, watching, mesmerised by her lack of care for others opinions. Her maid and the footmen had come and gone, filling a bath for her, while he’d remained in her bed.

Before she’d got into the tub, she’d taken off the rings which she’d worn the night before and left them on the chest beside her bed. He’d picked one up, surprised by just how tiny it was and played with it while she talked, laughing at him from her relaxed pose in the water.

Even then he’d known what a precious thing he’d found.

A Lord’s Desperate Love is the  story of two of the characters from the 2nd book in the Marlow Intrigues Series ~ ‘The Passionate Love of a Rake’.

The true story of a courtesan, who inspired The Illicit Love of a Courtesan, which I’ve been telling every Sunday, will continue alongside this. 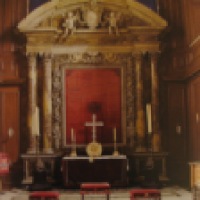