Sorry, it has been a few weeks since I last shared a part of Caroline’s true story, but I have had writing deadlines, so I had to press pause, but anyway, now Caro is back, and I will just dive into her story today. Here is the history of this series of posts for anyone joining today and as always if you are a regular follower, just skip to where I have highlighted the text bold.

I was drawn to Lady Caroline Lamb, who lived in the Regency era, because Harriette Wilson the courtesan who wrote her memoirs in 1825, mentions the Ponsonby and the Lamb family frequently. Also the story of Caroline’s affair with Lord Byron captured my imagination. Caroline was also a writer, she wrote poems, and novels in her later life. I have read Glenarvon.

Her life story and her letters sucked me further into the reality of the Regency world which is rarely found in modern-day books. Jane Austen wrote fictional, ‘country’ life as she called it, and I want to write fictional ‘Regency’ life rather than simply romance. But what I love when I discover gems in my research like Caroline’s story is sharing the real story behind my fiction here too.

Lady Caroline Lamb was born Caroline Ponsonby, on the 13th November 1785. She was the daughter of Frederick Ponsonby, Viscount Duncannon, and Henrietta (known as Harriet), the sister of the infamous Georgiana, Duchess of Devonshire.

Caroline became an official lady when her grandfather died, and her father became Earl of Bessborough earning her the honorific title ‘Lady’ and she grew up in a world of luxury, even Marie Antoinette was a family friend. Caroline was always renowned as being lively, and now it is suspected she had a condition called bipolar. As a child she earned herself a title as a ‘brat’, by such things as telling her aunt Georgiana that Edward Gibbon’s (the author of The Decline and fall of the Roman Empire) face was ‘so ugly it had frightened her puppy’.

And when she grew up Byron once described Caroline as “the cleverest most agreeable, absurd, amiable, perplexing, dangerous fascinating little being that lives now or ought to have lived 2000 years ago.”

When the Caroline and William began their married life, in their private apartment in the William’s parents’ home in London, they had an income from his father of  £2,200 to live upon; which was in those days a considerable amount of money to a servant, but not for the aristocracy who were trying to uphold appearances, and especially for a young bride like Caroline who had a desire for the theatrical and liked to impress. She employed her own pages and dressed them in a livery she’d designed, with scarlet waistcoats, breeches, and a brown Hussar jacket, trimmed in red with six rows of round silver buttons. (I love Caro’s eccentricity – but it would probably not have seemed so eccentric then, flare and style was the DNA of elite society in England in the early 1800s, everyone wished to make their mark, and be admired).

You can image then that the couple were not pleased that when they were still only recently wed Edward’s sister’s wedding began to be planned. Emily Lamb was to be married on the 20th July to Lord Cowper, a wealthy, powerful, much older man. Emily was thrilled about the marriage, and must have bragged exuberantly. She wrote to her mother, and signed her name with a ring around it, which she called a ‘mythical ring‘ of  ‘unaccountable power‘ – now do you see what I mean about the desire to impress. They were all at it.

William, being a Lamb, as I described in the last part, of course used to speak to Caro in ways which were not considered genteel. In the first months of their marriage he spoke to her about his previous love-affairs, including an infatuation for Caroline’s cousin, Lady Morpeth, whom he had spoken of his feelings too. You can imagine who wounded that must have made Caroline, feel and there are several letters in existence, in which she writes to her cousin about the things William has said, “I often talk to of you to William & am more delighted than I can tell you with the Frankness and affection with which he speaks of you. We agreed that if he had denied having felt a very strong attachment to you he might have been less guilty of of the charge of inconstancy but would have had many more faults to answer for— he is frankness itself., However & does not scruple to say he loved you very sincerely...” and perhaps this was a response to a charge of jealousy. “You are deteremined I find to write such wicked letters that I must either give you up for ever or scold you very—— jealous—— merciful heaven what words! If I was jealous you should drink slow poison every morning and if I was jealous I should hate you instead of which somehow or other you know I L….o….v….e you lady and therefore no more—-”  And I love the way Caroline writes, with numerous expressions of her words.

However Little G, now Lady Morpeth, remained Caroline’s friend and her closest confident. It was G Caro asked for advice when she fell pregnant.

“am I with child G tell me fairly what you think & how you felt when you were so first, had you ever little unaccountable pains many fears that you were going to miscarry were you nervous apt to be frightened very hungry every day very sleepy and very languid and did a great deal of exercise give you a pain in your back, were you restless——-pray tell  me also for I have nobody else to ask though it seems rather an extraordinary question to ask but is it bad for you to sleep (Caro underlined the word sleep in her letter) with your husband at the time in the most significant sense of the word—I am anxious to know for I must let nothing be done that can hurt my darling boy who I love already better than any thing”

I think Caroline’s letter to G is a wonderful insight into the words of a young Regency wife. But then Caroline gives a little more insight into her and William’s married life and how she felt about her husband.

“We are reading tolerably little & I see too little of William—today I lead a quite pleasant life but today for the first time I went out to shoot with him it was pretty to see the Dogs & my beautiful husband with all his black hair over his brows & a great colour from the eagerness & and animation he felt pacing over all the stubble fields with his gun on his shoulder & and me on his arm sometimes we rode & and then he brave and stoutly led my Horse. I was delighted till I saw one partridge killed and another wounded which though at too great a distance really to see I imagined  & greatly disgusted I went away.” Caro was such a romantic, but romanticism was the culture of the age. Both for men and women. “Tell Car I am still as I was at Holy Well that is I am convinced the Mother of a beautiful boy. I am sure I feel the boy move—

Burn this immediately & if you tell Lord Morpeth a word of what I have said to you tremble at what I shall repeat to William”  Thank heavens G did not burn it! I love these letters.

Poor Caroline’s pregnancy was not an easy one though, she records in a later letter to G “I was allarmed for I grew languid & had pains in my back weakness all over and ceased to be sick they confine me all day in an horizontal posture to a couch and in general make me dine upstairs.” There is another element of this letter though which I love. In my books I often describe affectionate couples, and I think it probably would not have been the case in the era all that much, and yet I’ve always believed there must have been some couples who were openly in love and affectionate, hear Caroline’s words “Lord and Lady Aberdeen flirt together au notre mode—Lady Abercon says if you will not repeat the joke “I come out from dinner and am almost always obliged to pull my veil over my face on one side Kat and Lord Aberdeen set on an arm chair so close that it is no matter whether they are embracing or no for a I defy a person to find out when they are not & if I turn the other way I see Caro and William very comfortably gone to bed in another part of the room on the couch”

Another thing I was thrilled to hear in Caroline’s letters to G, was an admission from Caro that they shared a bed every night, something which was not thought normal for the aristocracy but I put in my novels regardless. “since I wrote William left me for two days & a night for his detestable yoemanry dinner—I did not know before how cold and melancholy it was to sleep by yourself.”

Sadly though in the January 1806 on the 31st , Caro went into premature labour, she was right, it was a boy, and he was born on the 1st February 1806 but he lived only for a few hours, too small to survive, and I think what must have made the whole experience even worse for her, when she relied on William so much, he was not at home when she miscarried. He returned home to find his wife in bed, mourning the loss of their child and recovering from a traumatic labour. It must have struck at the foundation of their marriage. I wonder if Caro had had this child and if it had been fit and well, if that may have changed the outcome, if they futures would have run a different course. I do find Caroline’s life story very sad…

All being well, no deadlines… so more next week

If you would like to read my historical romance story that was inspired by Caroline’s life… it’s just coming up for pre-order The Dangerous Love of a Rogue, will be out in ebook in January and can be pre-ordered for Paperback release in March.

But if you can’t wait for Regency stories, then grab one of my books many of them are currently on offer in the UK from 69p and in the USA from $1.99 and there are couple of little extras for free… 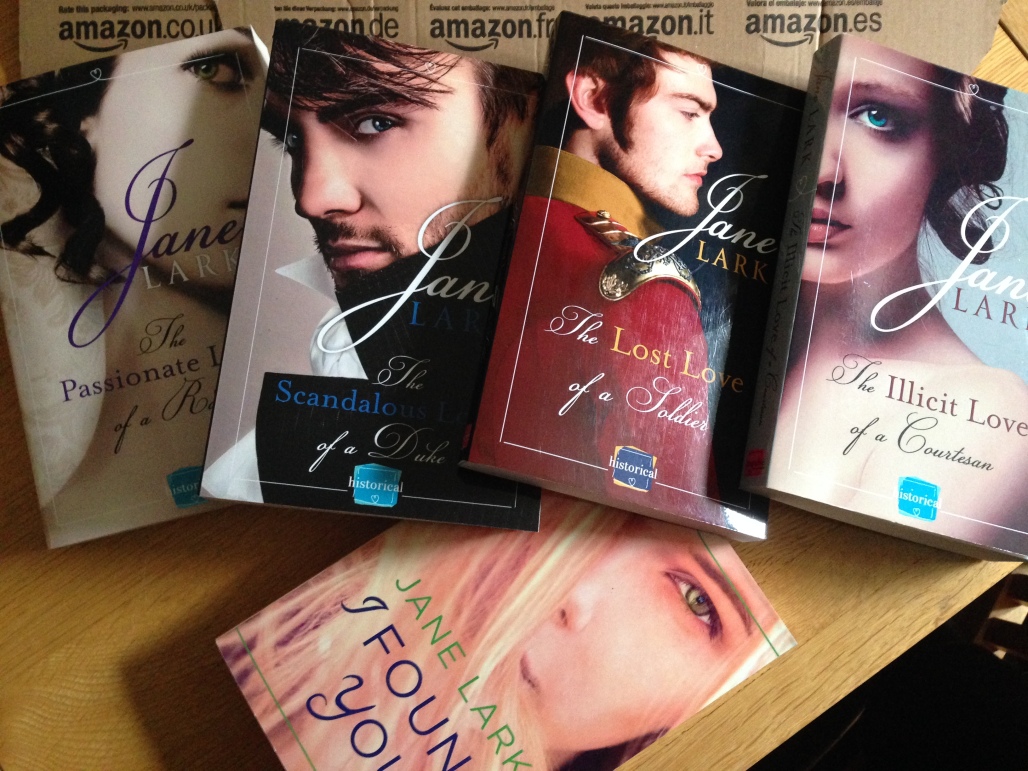