Just for the Rush

A surprise marriage proposal from her perfectly nice Rugby playing boyfriend, Rick, has Ivy Cooper heading for the hills. She isn’t looking for a comfortable future, she wants something more, something that will make her heart race.

And her heart only beats harder when she’s with Jack her playboy boss. While Rick’s comfort is cosy, Jack’s protection makes her feel like she’s in a fortress…and his style of sex…well, it’s like nothing she’s every experienced before…

The perfect location for a love affair

Whether it’s a ruined Roman fort on a hill top; a pebble beach near the old harbour wall in a traditional English town; an office with a mass of glass that looks out at the New Year’s Eve fireworks in London; or a stroll along the riverside in Windsor; there’s always a beautiful place to be found for a little seduction of the mind as well as the body. That is Jack’s view in Just for the Rush. He is a lover of beautiful English settings for his romantic moves and those settings add to his dramatic charm for Ivy. But the question these places leave Ivy thinking is, ‘is it the beautiful back drops that make what we have special, or is it me?’

Think, though, would Wuthering Heights have been the same without the high barren hill tops and windswept rocky slopes where Heathcliff and Cathy fell in love? Would Pride and Prejudice have reached the same satisfaction in its conclusion without the influence of a view of Pemberley House and Park, when Lizzie first discovered her change of heart? The setting of scenes in stories can entirely shift a perspective for characters and the reader.

I have always taken holidays mainly in the UK and now even when I try not to plan to research for books, it always happens. There are so many amazing settings in the UK and when I visit these beautiful places characters start whispering a story in my mind. Jack and Ivy have many of the best of them in Just for the Rush, including my most favourite place, Castlerigg, in the Lake District, an ancient stone circle high up in the Cumbrian hills.

One of the reviewers of Just for the Rush has already recognised that Jack may well be an undiagnosed sufferer of Attention Deficit Disorder. He is always charged up, with his entrepreneur brain that drives him on to attack life at 90 miles an hour. But then his character hits a beautiful setting and his mind knows how to appreciate it. He spots every detail and wonders at it. It isn’t just the look of being in a beautiful place, it’s the smell and the energy in the air around him too. He needs things to slow his mind down and appreciating beauty does that.

The fact that he can recognise that beauty also rubs off on Ivy.

Awe. That is the only word for when you really see beauty. Awesome is a modern word that is very over used, but true awe knocks you back a step and makes you take a deep breath. It makes your heart race and it makes you see everything differently, including the people standing with you.

So is it the beautiful settings that make what Ivy has with Jack feel so deep, emotive and special, or is it him and her? 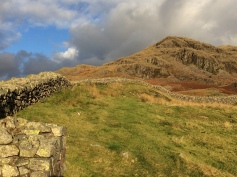 Oh, quick warning, the book contains Jack who is a challenging character and a very naughty man! Will be liked, hated at times, and possibly cried for.