Researching a stalker was actually really fun although, you may think it was a little creepy. A lot of authors will tell you that police officers would find their Google search history very interesting, and mine would definitely be amusing if you looked back through the months when I wrote this story.

My first psychological thriller, written under the pen name J.S. Lark, has topped the Ghost Thrillers and Vigilante Justice Thrillers charts in the USA today and is in the Psychological Fiction top 20. I think therefore it is about time I got around to writing this post. I planned to do it a couple of weeks ago but then COVID-19 caught me. I am lucky to be well on the way to recovery now, though.

Of course, in real life I have never stalked someone so to understand what was possible in this story and to get into a stalker’s mind, I had to explore what can be found about someone on the internet. Without giving away any of the plot, which has a lot of twists I would hate to spoil, I can tell you I researched all of these things:

I did not only play stalker on the internet, though. As you know, for my historical books I do a lot of physical research, travelling to places to learn the reality in the setting, which is the whole premise for this blog. So, I did also spend a day in Bath where a large part of the book is set and walked around the areas my character does. I lived in Swindon for 16 years, and I lived in the centre of Swindon of several years, so the scenes set in Swindon are in areas I know really well. But I only recently discovered the Green Park area of Bath, and so I went there to try and get my mind into what it would feel like to sit on a park bench for hours and watch a house.

I didn’t sit on the park bench for hours, but I did sit there for one hour on a cold grey day, with a cup of take-away coffee in hand and just took in the atmosphere, and in my mind imagined what it would be like to be 100% focused on someone in the house on the other side of the road. 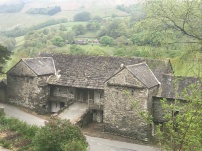 The last house out of the three, Townend Farmhouse in the Lake District, I only came across recently. I was in the final stages of editing Treacle Moon, reading and re-reading to sift out all the mistakes (as all my followers on here know, I have dyslexia so editing is quite a task and I don’t like sending books to a professional editor until the book is nearly perfect 😀 ). I was also still tweaking scenes I was not 100% happy with. At this time, there was a room … I will call it, a sticky room … in my imaginary house.

It’s very normal for authors to have sticky points in books, but it is usually with the plot. It is usually when the story you initially thought of ends up forcing a character to do something out of character, and so you need to come up with a different story direction. Or when you are missing the step change to take the story line from one point to another. But, no, this was a “sticky” room. I have never had that before. 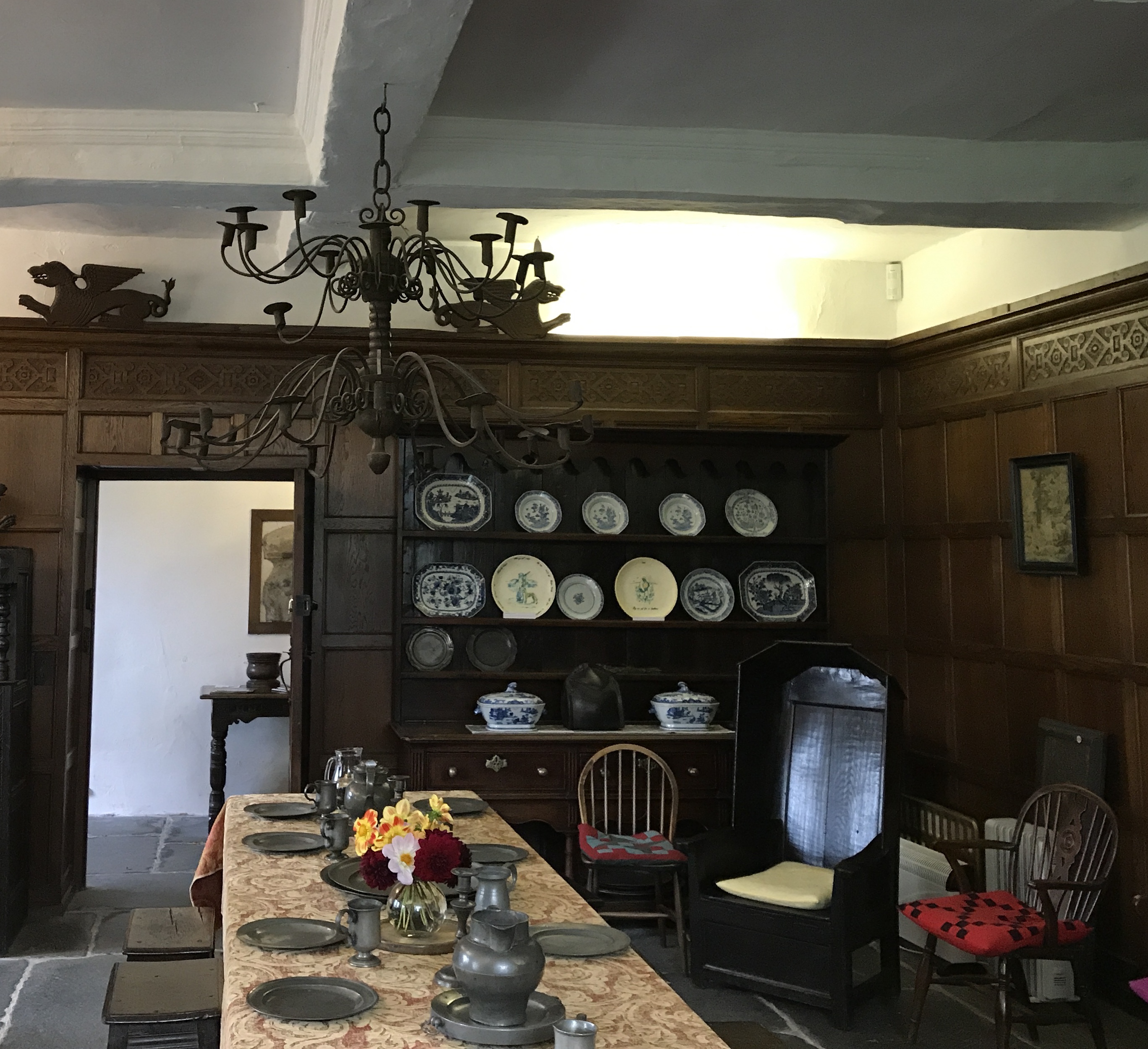 Most of the scenes in my character’s house take place in the parlour/dining room, a room like the one in Swarthmoor Hall. A  room with different uses, unlike those found in upper class homes. There was another of these diverse rooms in Townend Farmhouse. A room where the family would have gathered to eat in the evening, where the women may have sat down to spin or sew in the afternoons, and to entertain themselves after dinner by reading or playing music and singing.

Other scenes take place in a bedchamber, like the bedchambers in Swarthmoor and Townend.

But I wanted a smaller more intimate setting for other scenes that needed to take place in a downstairs room. I wanted a room that was kept for a particular use, so that it wouldn’t be a busy space. This room could then have been deliberately preserved to keep a moment in time in place.

Initially the room was an office.

I have used offices before, but this is more fitting for a character who is steward, and the furniture I have seen in these settings in real life does not fit with intimate window-seat conversations. The descriptions just did not feel right. 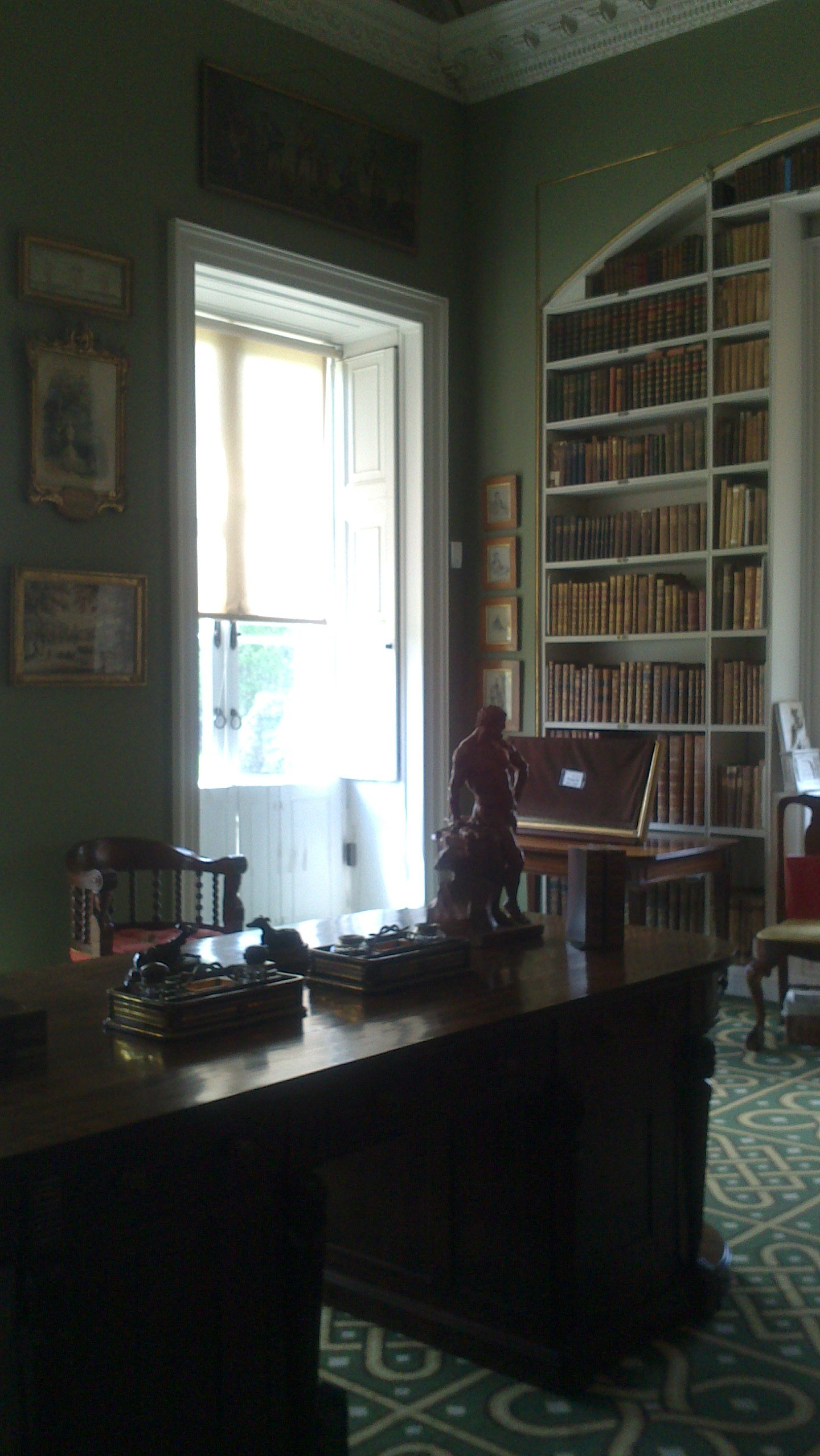 In the Marlow Intrigues a lot of the most emotional scenes happen in the library.  Which I have always pictured as being very like the library at Stourhead. But of course this is no good for my lost-in-time manor house which was created in a different era and much smaller than the Duke of Pembroke’s Palladian Mansion.

There is a smaller room at Swarthmoor, but that isn’t really definable by any standard description. There are chairs against the wall and a writing desk, and that is it. My mind just would not turn that image into what I wanted the room to be. That room felt stark, a place for working not living in. I needed a comfortable space, where people would spend happy times but not a separate parlour because it would not be right for the period of the house.

I changed all references in the book to call the room a study, trying to think of it more like Byron’s rooms at Newstead Abbey, which I have been using as an inspiration for Lord Bridges small personal space. 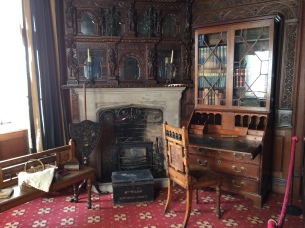 But again, that just did not fit what I thought would be right for this lost-in-time manor house. It was too modern for that period, and it still didn’t feel like an intimate happy space. Again, it felt like a working room, and a masculine space, that would have been preserved for the use of the men in the house. I wanted a female character to feel just as at home there.

Then we visited Townend and yet again I am walking around a middle-class house, with dark oak panelling and rooms packed full of a preserved way of life that is whispering stories. Even before we walked into the house my thoughts were flowing with the issues of this “sticky” room. Because I had been working on Treacle Moon in the car while we were travelling.

Where as Swarthmoor added a sense of peace and happiness into my old house, Townend spoke of a busy way of life and a bustling atmosphere. It seemed to bring the people to life not just the spaces. Where that was most apparent, though, was in the very small library. It is tiny by comparison to Stourhead, probably less than a tenth of the size, more like a small bedroom. But this little library at Townend feels as if it was a family hub. It really was about what it felt like not what it looked like.

Literally in a second, just leaning in to look at the room, because you can’t even walk into the room as the books there are so rare, and I fell in love with that library. I knew I had found the perfect little room for the more intimate scenes in Treacle Moon. It had never even occurred to me until that moment that a middle class family would have built up a small library like this. But it was obviously a treasured space, where people in the house hid out to seek quiet, comfortable moments. It was the room I had been trying to, and failing to, imagine.

So there is not too much more to say about the library, because before I decided to share my figurative journey in development of the house in Treacle Moon, I had already shared the details in a post on this blog: A beautiful family library full of historical treasure. 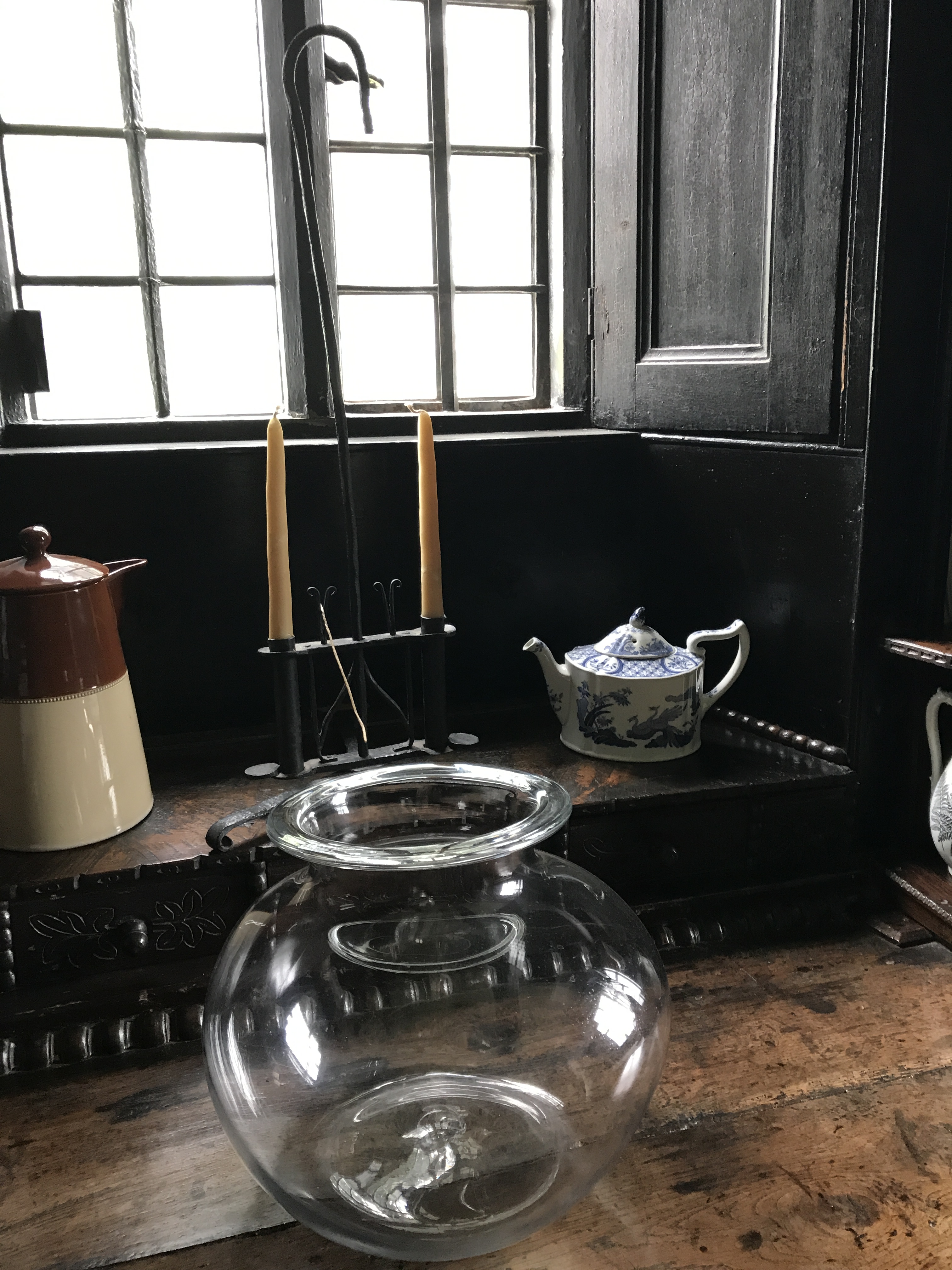 But I will add that I did  allow other little things I discovered at Townend to creep into the story. For instance the weaver’s bowl lighting. I could imagine how, in a dark house, where people would not have been able to afford to burn beeswax candles all the time, and so would have used tallow/reed candles, how much of an atmosphere the light reflected by a large bowl of water would add. So you will find that light mentioned in one middle-of-the-night scene.

However, macon was too obscure, even though I loved discovering that they used to smoke a sheep’s, aka mutton, leg, just like bacon.

So, having given you an insight into the real houses and homes behind my fictional home, I hope you will feel as if you can really see my characters walking about and sitting in the rooms in the scenes in my lost-in-time middle class home in Treacle Moon.

As always, thank you for all your support, if you read these posts than I know you must be a real fan who likes to help others discover the books. I wish you well, and I hope you enjoy Treacle Moon as much as I loved writing it <3. 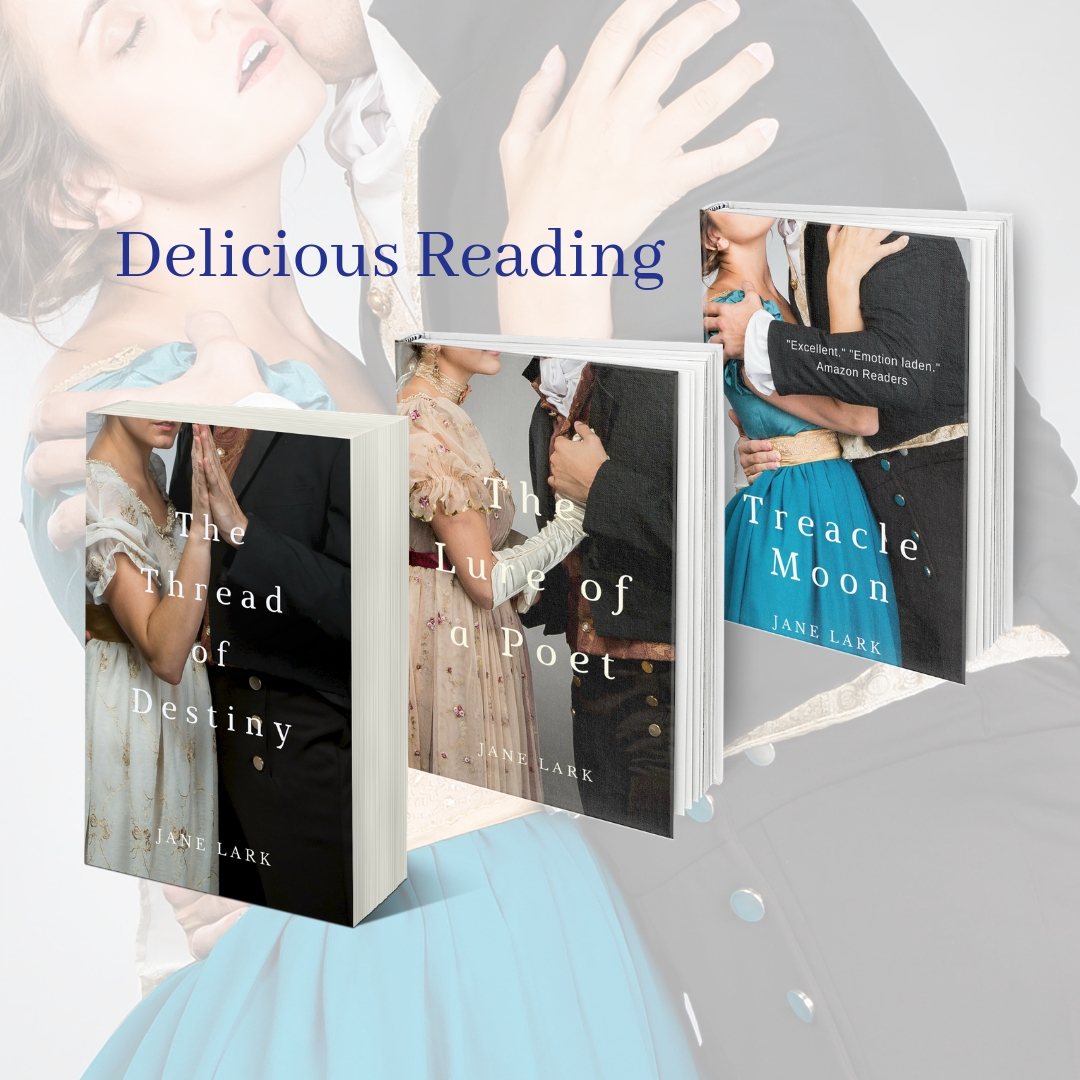