The week Downton Abbey returned to our screens in the UK, the viewers perception was captured on the UK TV programme, Gogglebox. It was really interesting to hear what people said, to help try to work out – what is the X factor in Downton Abbey? Why have so many people fallen for the show?

So people enjoy it… but why, why Downton Abbey and not another programme? What does it bring to the historical genre that other show’s haven’t? WHAT is the magic, the X gene in Downton’s DNA that makes some people love the show?

The Gogglebox viewers gave some clues, they asked questions of each other like, “What do they do as a job?” The lover of the show’s answer was… “Well they don’t really, they have dinner parties…” they then went on to say “Oh but they do have land,” and they mentioned “shares”.

“It’s all about love and stuff…” Another person described – although if you look at the story lines it has just as much been about death and hardship but then loss is still about love.

Then in families where some were lovers of the show and some were not, conversations debated a scene between Lady Mary and her latest admirer. It was interesting then to see how people emotionally engaged with the scenes. Earlier people had talked about the characters as ‘our friends’ well now you hear different viewers talking about characters like they are truly people they know and have a personal relationship with… “I can see something starting here…” She’s quite uptight, Lady Mary, isn’t she…” Then Lady Mary’s beau offered to “make your life simpler…” “How much simpler can it get… she has people to do everything…” 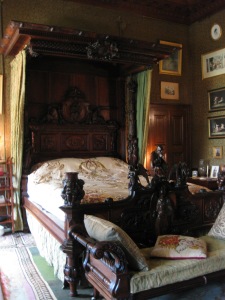 Then there was the scene where a fire began in the house, which started in Edith’s room. “Please God say they don’t kill Edith,” a young man shouted out. Then there was a close up on the eyes of one of the viewers and the look in her eyes said she was completely and utterly absorbed in the programme, she was emotionally connected to the characters and the scene as it played out. I shan’t tell you what happened I wouldn’t want to spoil it for viewers in America, but the body language of those watching the scene was fascinating…

How does Downton Abbey do it?

Well, their priority is not to get every fact of the historical setting correct. I have heard historians pull the scenes and the story lines to pieces, it is not at all historically or factually based – it is firstly fiction, and secondly a drama – I heard the person who helped the story developer for the film RUSH (something completely different – and I know not historical in the terms people think of historical) but it was someone who knew the fact behind the story, and he said, when he complained that the film wasn’t really about what actually happened “they told me they weren’t making a documentary they were making a film.” Like wise the director of Downton Abbey isn’t make a documentary, but making a drama… something they want to pull people into at an emotional level not an intellectual level.

1. I don’t make the priority in my books the historical fact – I don’t worry about exact, historically correct, language, people may not even know the words people used in the past, one of the things about Downton is its accessibility to anyone, it gives people the sense and feel of a historical setting, but it does not push people away by using words they don’t know or situations and characters they can’t relate to. Primarily people need to understand the characters, and understand how they feel and what they say.

2.So  I focus primarily on the characters I create. I want people to feel as emotionally engaged with my characters as people do with the Downton Characters… and I hope for those readers who love to be lost in a historical setting… I’ve achieved that… One reviewer said to me, when she read The Illicit Love of a Courtesan, when Ellen gripped her dress, I actually gripped my maxi dress as if I was going to climb up onto the horse with her… That made me feel like I was doing something right, and the viewers of Downton seem to connect with the story to that degree.

3. I create settings that allow people to feel as though they are escaping reality, “they have dinner parties…” “It’s all about love and stuff…” “How could you make her life simpler…” the story lines are about more than the viewers perception but because it steps them so far away from their reality, it is like a fairytale… and people still aspire to fairytales even in the 21st Century, so even though they are travelling through a story in which bad things occur, they still connect with the story as an ideal they aspire to.

If you would like to discover how I try to translate that in books then The Desperate Love of a Lord, A Free Novella, is now available as a taster, and if you are quick, the Marlow series is currently discounted in both the USA and UK from $1.99 in the USA and 69p in the UK…  Click on the covers in the side bar to view on Amazon.

and lots of other true stories from Jane Lark