If you read my last post you will know where this journey began – in 1840, when our house and land were owned by a Reverend Hopkins.

The records office in Chippenham found a lot of documents about the property and the 165 acres of land that Rev. Hopkins had owned, and who the property and land had passed through after his death. But as I said last week, I was not interested in recent years I wanted to travel back in time with my house and the land it was built on as far as I could reach.

At the end of my first day searching through old records handing over mortgages, land and property leases, I came to the end of the pile of documents that the records office had identified for me. But in the last and oldest document, an Indenture dated in 1813, I found this…

A record of the documents that showed who had owned the land and property all the way back to 1671. This document, show in the pictures above, was signed by Charles Tylee, and it names an Edward Gilbert as taking on the lease. An Edward Gilbert was also mentioned as leasing most of the land and one of the two homesteads and orchards in 1840.

At this point it was late on my first day in the records office, and when I spoke to staff they did a quick search for the documents listed in 1813 and could not find anything. It seemed as though my search had hit a dead end because without reading the listed documents I could not be sure that they actually included our house and/or land.

But I was not to be defeated. At home in the evening, I searched the online database for the records office to find the missing documents. I thought there was still a chance they might be somewhere in the records that were held there.

I found the first document, John Tylee’s will, buried in with other documents from his lifetime. 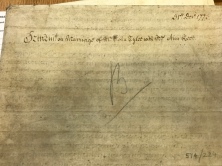 “Deeds from 1843 of a shop in the Market Place, Devizes (plan in 1877 deed), also relating from 1826 to property in New Park Street (plans in deeds). Marriage settlement of John Tylee of Devizes and Ann Reed of Romsey, Hampshire, relating to the house occupied by Tylee in St, Johns parish, Devizes, and Barley Hill house and land in Poulshot, 1773. Copy will of John Tylee 1809; schedule of deeds 1891; inventory of the contents of a house and work shop probably of Mrs Burt, 1915; Tylee, Crockett, Greenham, Burt, Clark.” 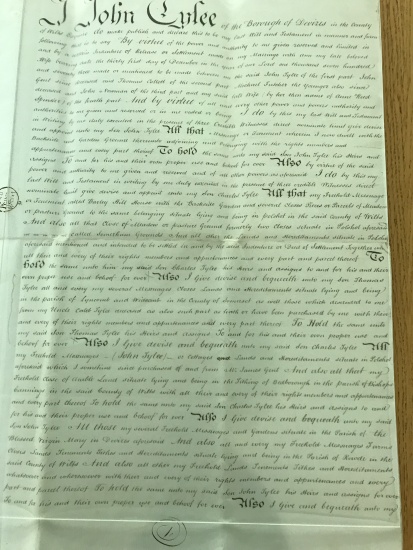 settlement, but he also owned many inns and land in Devizes and the surrounding areas. All the records talk about tenants, showing that the property in Poulshot was leased, he never lived here himself. He lived in Devizes and his occupation is recorded as a brewer.

He owned even more land than Reverend Hopkins had because John Tylee also owned the land called Barley Hill and Home Close, and the buildings listed as being present in those areas. But for some reason these other areas of land in Poulshot were sold or passed on in 1798 to someone called Simpkins, who was given 1/13th of the holdings in Poulshot. But of course the title Barley Hill and his occupation, makes me wonder – Did he therefore own and lease the land to grow barley for brewing? I am not sure of that yet, although I think I can find out in the future, because the records office have an accounts book for John Tylee’s company that I hope will show the income for the lands and properties in Poulshot.

When John Tylee died, his will passed the land in Poulshot to his eldest son Charles Tylee, whose signature was on the document written in 1813. But, anyway, I am not working forward in time, I am working back.

The account book listed in the records is described “Private account book of J Gent of Gent and Tylee, brewers of Devizes”. It is for the period 1827-1829. Now here is another clue.  Obviously date wise this is later than 1802 that is when I had discovered Tylee’s purchase records. So I did not look at this book at the time, but it immediately told me that Gent and Tylee worked together, and the 1813 document showed that Gent had sold the houses and land in Poulshot to Tylee.

My record searches showed up lots of references to documents from the brewery business that Tylee and Gent ran together. “Gent, James, Common Brewers, Tylee, John, the younger Common Brewers, Tylee, Thomas Common Brewers”. But also the surname Rose appeared, and in the 1813 document it shows Charles Rose owning the land and property before Mr. Gent, and before Charles, his father John Rose. It turns out that they were also brewers. “Rose, Charles brewers and co-partners. Tylee, John brewers and co-partners,” was referenced in 1762.  The document referenced in 1813 shows that Charles Rose died in 1772, and passed the land and property in Poulshot on Mr. Gent.

Charles’s father’s will had left that land to him in 1740. 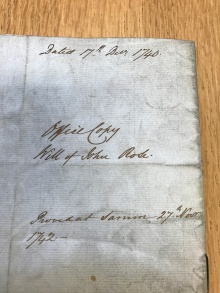 If you remember, last week I told you that the drawing at the very top of this post, captured the appearance of our house in 1786, so now I know that in that year the house was owned by the brewer, James Gent and his wife Mary, and would have been lived in by a tenant, as is recorded in John Rose’s will above, and in the Tylee records.

It is still clear even in these early documents, though, that there were two properties on this area of land, with gardens and orchards, as is shown in the 1837 map in my last post. But in 1740 John Rose’s will only speaks of one tenant, John Cook. In 1837 one property is leased with the orchard, separately to the property leased with the rest of the pasture land (that second property is called Manor Farm).  So did John cook lease the house we live in, and then sublet Manor Farm? That is also something I cannot yet explain.

When I finished my research in the records office on the Friday, I had caught the research bug. I came home with a desire to find out even more. I had raised more questions in my head than answers. So I began searching on line for other references that might tell me more. I came across this post on Devizes Brewers in the Devizes online history pages. It mentions Mr. Gent, Charles Rose and says that John Tylee was the nephew of Charles Rose.

There is still far more for me to tell, because this is not where my journey through time ended. But this post is getting a bit long so I will end this chapter by telling you something related to this, that is quite a twist of fate.

If you know Devizes, you will know that even today a brewery has pride of place in the centre of the town. Not only that, it is one of the only breweries that still delivers kegs by horse and cart, in Devizes town. Wadworths influence is so broad in Wiltshire, they call the area Wadworthshire. They took over the Tylee and Gent inns according to the Devizes blog post.

But that is not the twist of fate. The twist of fate is that even though the 165 acres that Rev. David Hopkins owned moved out of the hands of brewers after the last Mr. Tylee and Mr. Gent, a couple of generations later a director of Wadworths made his home in Poulshot.

Major John Bartholomew bought a house that had been built on one of the plots of the 165 acres, later he sold that house and bought the orchard that belonged to the house we live in. He built himself a house on that orchard land.

He also bought the plots of land behind the orchard that had once been part of the 165 acres, and then created a tradition in the village that lasted for years.

Every August, when the brewery shut down for a summer holiday, the shire horses would be brought down to the village from Devizes. They would have a pint at the pub and then they would walk down through the village and be let free to run in the fields behind our house.

I have no idea whether Major John Bartholomew, or as every one knew him ‘The Major’, knew that the land had previously been in the hands of brewers for generations. Sadly, I will never know, because he passed away not so long ago at the age of 95, but I think it is a lovely twist, whether he knew about it or not.

The horses drinking their beer in 2015 🙂

Next week, I will take you back to Poulshot in the Civil War.