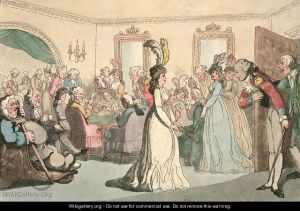 ‘Company at Play’, Thomas Rowlandson, Plate 8 from Comforts of Bath, 1798

This week I am going to tell another true story of the life behind the closed doors of 18th CenturyBath, taken from Oliver Goldsmith’s, The Life of Beau Nash.

The story begins one evening in the Upper Assembly Rooms of Bath, where Beau Nash was in attendance. And although the author does not tell us how, Beau Nash must have had heard some rumour, or known something specific was about to occur. He must therefore have been entangled in all gossip and perhaps played confident too.

But by whatever means he came by the information on the evening in question, he approached a lady of ‘no inconsiderable fortune,’ and her daughter, and ‘bluntly told the mother, she had better be at home:’ It was an ‘audacious piece of impertinence, and the lady turned away piqued and disconcerted. Nash, however, pursued her, and repeated the words again.’

The second warning was observed, as the mother perhaps realised the impertinence had some purpose, ‘and coming to her lodgings, found a coach and six at the door, which a sharper had provided to carry off her eldest daughter.’

The sharper, a Colonel M—- ‘At the conclusion of the treaty of peace at Utrecht,’ ‘was one of the thoughtless, agreeable, gay creatures, that drew the attention of the company at Bath. He danced and talked with great vivacity, and when he gamed among the ladies, he showed, that his attention was employed rather upon their hearts than their fortunes. His own fortune however was a trifle, when compared to the elegance of his expense; and his imprudence at last was so great, that it obliged him to sell an annuity, arising from his commission, to keep up his splendour a little longer.’

However, ‘he had the happiness of gaining the affections of Miss L—-, whose father designed her a very large fortune. This lady was courted by a nobleman of distinction, but she refused his addresses, resolved upon gratifying rather her inclinations than her avarice. The intrigue went on successfully between her and the colonel, and they both would certainly have been married, and been undone, had not Mr Nash apprised her father of their intentions.

The old gentleman, recalled his daughter from Bath, and offered Mr Nash a very considerable present,’

While ‘In the mean time colonel M— had an intimation how his intrigue came to be discovered; and by taxing Mr Nash, found that his suspicions were not without foundation. A challenge was the immediate consequence, which the king of Bath (Beau Nash), conscious of having only done his duty, thought proper to decline. As none are permitted to wear swords at Bath, the colonel found no opportunity of gratifying his resentment, and waited with impatience to find Mr Nash in town, to require proper satisfaction.

During this interval, however, he found his creditors became too importunate for him to remain longer at Bath, and his finances and credit being quite exhausted, he took the desperate resolution of going over to the Dutch army in Flanders, where he enlisted himself a volunteer. Here he underwent all the fatigues of a private sentinel, with the additional misery of receiving no pay, and his friends in England gave out, that he was shot at the battle of —.’

When the Colonel left England the noble man continued to pursue Miss L—- and ‘pressed his passion with ardour, but during the progress of his amour, the young lady’s father died, and left her heiress to a fortune of fifteen hundred a year.’

She thought herself over the Colonel, after an absence of two years ‘and the assiduity, the merit, and real regard of the gentleman who still continued to solicit her, were almost too powerful for her constancy.’

But in this period Beau Nash, ‘took every opportunity of enquiring after colonel M—, and found, that’ his rumoured demise was untrue ‘he had for some time been returned to England, but changed his name, in order to avoid the fury of his creditors, and that he was entered into a company of strolling players, who were at that time exhibiting at Peterborough.

Beau Nash must have seen or heard something that twisted his conscience over his actions of two years before, for, ‘He now therefore thought he owed the colonel, in justice, an opportunity of promoting his fortune, as he had once deprived him of an occasion of satisfying his love.’

To make amends, Beau invited the lady. Miss L—, along with her adoring noble man, to be a member of a party visiting Peterborough, ‘and offered his own equipage, which was then one of the most elegant in England, to conduct her there. The proposal being accepted, the lady, the nobleman, and Mr Nash, arrived in town just as the players were going to begin. Colonel M—, who used every means of remaining incognito, and who was too proud to make his distresses known to any of his former acquaintance, was now degraded into the character of Tom in the Conscious Lovers. Miss L— was placed in the foremost row of the spectators, her lord on one side, and the impatient Nash on the other, when the unhappy youth appeared in that despicable situation upon the stage. The moment he came on,’ he saw her ‘but his amazement was increased, when he saw her fainting away in the arms of those who sat behind her. He was incapable of proceeding, and scarce knowing what he did, he flew and caught her in his arms.

“Colonel,” cried Nash, when they were in some measure recovered, “you once thought me your enemy, because I endeavoured to prevent you both from ruining each other, you were then wrong, and you have long had my forgiveness If you love well enough now for matrimony, you fairly have my content, and d–n him, say I, that attempts to part you.”

Their nuptials were solemnized soon after, and affluence added a zest to all their future enjoyments. Mr Nash had the thanks of each, and he afterwards spent several agreeable days in that society, which he had contributed to render happy.