for my Historical Romance readers ❤ © Jane Lark Publishing rights belong to Jane Lark, this should not be recreated in any form without prior consent from Jane Lark 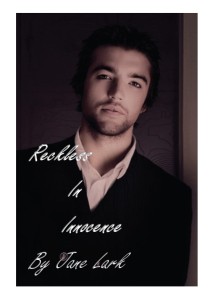 ~ Read the earlier parts listed in the index

“I am here to see my sister! I believe the Duke has her here!”

Elizabeth’s gaze lifted from the table and she looked towards the voice which echoed in Marcus’s vast marble lined hall through the open doors of the dining room. Then she looked at Marcus.

Elizabeth rose, as did her husband, and their wedding guests, Jason, Angela and his aunt. They had wanted no-one else, no-one who would stare and gossip. The announcement would be in the paper tomorrow. London would know soon enough that society’s most notorious rake and its most reckless debutante had made a match.

Her legs moved into a run, her soft silk slippers lightly striking the marble floor, her skirt caught up in her hand, as her heart thumped with sudden expectation.

“Darren!” she called back, as she reached the hall, to meet a scene of her brother’s arm caught in the grip of her husband’s footman. “Darren…” She stopped running and walked towards him. Stunned. She had not seen him for years. He looked so different – a man, not a youth. “Darren.” A man, not her beloved brother.

She walked closer, as his gaze took her in, it had been flooded with anger, but now the anger melted away. Then his gaze fell to her stomach.

Her condition could no longer be hidden by the high waistline of her gown.

“Where is he?” Darren’s voice became bitter with anger again as he looked up.

“I am here,” Marcus’s voice echoed about them, from behind her.

The footman let go of Darren’s arm. Elizabeth looked back at Marcus. He walked closer as she saw Jason, Angela and his aunt gather at the open door into the dining room.

She turned back to look at Darren. He strode forward with a heavy limp, his hands gripping into fists.

Elizabeth stood before Marcus, her hands lifting to stop Darren. “Darren, please.” She had longed to see him for so many years.

“Please what? Please do not throttle the bastard for what he has done to you?” Darren barked.

“He did nothing to me,” Elizabeth pleaded. “What happened to me is all Father’s fault. Marcus is not to blame. We are married. See…” She held out her hand where the gold band Marcus had placed on her finger this morning caught the light, glinting.

Darren stopped, looking down, and then he inhaled and straightened a little. One of his hands stretched open. Then reached out and gripped hers; to look at the ring.

“You know how it was with father,” Elizabeth continued, speaking more gently. Darren looked up and glanced from her to Marcus, then back.

“Your Grace, is it then?” Darren said more quietly, his eyes studying her face with a look that absorbed everything their years of separation would have changed. He bowed his head then, in deference, but it was almost a mocking gesture, and then a smile lifted his lips at the edges.

“Oh, Darren.” Elizabeth could hold herself no longer. She threw her arms about his neck and embraced him hard. He may look different, but he was still the brother she had feared for, and loved, and longed for, for years. “Where did you go?”

“To war,” he answered against her ear. “I have been fighting Napoleon. I was injured at Waterloo and now I am discharged. I came to find you, to take you away from them, but I am too late.”

“You are not too late. You are just in time to celebrate my wedding.” Tears of happiness escaped Elizabeth’s eyes, when she had spent too many years crying sad tears for him. She let him go and wiped them away.

“You are crying?” He studied her face. “I hope I did not distress you?”

She shook her head, with an assertiveness that denied it hotly, though the lump of emotion in her throat made it too hard to speak.

“My sister, fully grown and beautiful,” he whispered.

“I thought you were dead,” she answered, in a harsh voice which fought more tears. “Why did you not write to me? You promised.”

“I could not risk writing. If I had done so, Father would have found a way to use you against me. That is why I left. When he realised I was no longer scared of him, he threatened to use you to get at me.”

“But you are back now,” she smiled. “and Father is in jail.”

“She has made her own lot in life, Darren; I will not mourn for her. I do not wish to see her ever again.”

“But she is being looked after.” Marcus’s hand touched Elizabeth’s waist, as his arm settled about her. “I have established her in a property with a trust allowance, she will have food and a roof over her head, no matter what debts she creates.”

Elizabeth looked up at Marcus, love swaying through her heart. He gave her a look of understanding. Then she looked at her brother again.

“You must meet Marcus, and his family.” She stepped forward, away from Marcus’s comforting hold, and turned between her brother and her husband. “This is my husband, Darren, Lord Marcus Campbell, The Duke of Tay, Marcus, this is my brother, Mr Darren Derwent. He ran away when we were young, I have not seen him for years.” She turned to look at Darren. “But, oh, I am so glad to see him…”

“Mr Derwent.” Marcus held out his hand. “You are welcome to stay with us as long as you wish.”

Darren looked at Marcus’s open palm. His eyes narrowing a little. Then he looked up at Elizabeth again, before looking Marcus in the eyes. He took Marcus’s hand in a firm grip, briefly, then let go. “I shall give you the benefit of the doubt, Your Grace.”

Marcus, nodded at him, and smiled. “Thank you, and please simply call me Marcus, no title, you are my brother-in-law.” Marcus looked back, waving his family closer. “This is my brother Jason and his wife, Angela,” Marcus’s hand gestured further, “and my Aunt, Lady Fareham.” Darren bowed slightly to them all. Then Marcus turned fully to him. “We are in the middle of our wedding breakfast. Will you join us?”

Darren nodded his agreement. “Thank you.” He looked at Elizabeth as Marcus held out his hand for Darren to walk ahead.

Angela moved closer and took Darren’s arm. “Come, you are most welcome. It is a pleasure to meet Elizabeth’s brother.”

“It is a pleasure to meet another sane member of the Derwent family,” Jason jested. “They are a rare find.”

Darren made a humourous sound. “I take it then you know my parents…”

Their voices grew quieter as Marcus caught hold of Elizabeth’s hand stopping her from following them back into the dining room.

“Your Grace,” Marcus whispered to his Duchess.

Her face turned to him. Her turquoise eyes bright with joy.

“Your brother has stolen my thunder. I had hoped to be the first to acknowledge your progression from reckless to gracious.”

“I do not feel at all gracious at the moment. Clumsy would fit the part much better, with the size of my stomach.”

He stopped and pulled her into his arms. “Will you never realise how beautiful you are, within and without, and the child in your stomach only makes you more beautiful.” He kissed her lips, but it was a kiss which touched his soul. When he pulled away he whispered the words he loved to say, “I love you.”

“And I you,” she whispered back. “I never thought it possible to be this happy. I have always been so lonely. But I am happy now, Marcus, and I cannot believe that Darren is here too.”

“And is that the reason for your joy, your brother?” He laughed, teasing, knowing it was not the only reason, but wanting to hear the truth from her lips.

“That is the icing on the cake, you are the reason.”

She batted his arm with her open palm. “The icing is sweeter. Stop teasing.”

“Who is teasing? My childhood was no happier than yours, I never thought I would find a woman who could lead me to an altar, but I have. God I feel so bloody happy I could burst. His fingers slid to her stomach, and I cannot wait for this one to be born. God, look at me, look at us. Are we true? Are we to be believed?”

She shook her head at him. “I cannot believe how happy I am. Do you think we will wake up soon, and I will be back in Wiltshire and realise this was a dream?”

“If it is then do not wake, never wake. I am not losing you now.”

She smiled at him as he smiled at her, neither of them speaking for a moment, as awe rolled over him in a wave. Later, for the first time, he would have her naked in his bed. He would make love to her as it always should have been done; and they would be skin to skin. He would show her what love could be.“There is one way in which I may like your earlier analogy,” he leant to whisper to her in a conspiratorial voice. “If you choose to eat your cake. I have spoken with the doctor and he says there is nothing wrong with you being very gracious tonight.”

“Marcus!” She struck his arm, but she was laughing.

“My dear, I am a rake, and you have a reputation to uphold, as do I. Come, can we not be reckless one more time? Sod the breakfast let us go upstairs for the cake.”

Don’t forget if you want another story which will be exclusive to my blog, tell me in the comments below, or ask to join my new Facebook group which is only for the people who love the books, and vote on there