When I was young my parents used to belong to an archeology club and I would fieldwalk with them longing to spot something interesting. One particular memory is when I walked Faringdon bypass while it was being built in the summer of 1976. I was wearing my favourite halter-neck summer-dress and the sun was burning my back raw as I stared at the mud, longing to find a spearhead or a piece of pot.  I saw nothing. Ever.

But now I have found a lost, possibly saxon or norman, moat!!! Me! My name is on the Wiltshire records as the person finding a “potentially significant site” with my research used as a reference.

Great Chalfield is a manor near us that is still occupied, though, it was rebuilt in the Tudor period. You may recognise it no matter where you live because they have filmed some Poldark Scenes there. As you can see in the picture below the whole front element of a saxon moat is still in situ at Great Chalfield. That is what I believe the land in front of our house could have looked like, many years ago.

So let me tell you the story behind this discovery.

Obviously from this blog you know how much I love the real stories I discover in history and use in my fictional books. But it has been even more exciting discovering the stories about the place where I live.

Like most English villages, Poulshot, near Devizes in Wiltshire, has its myths and rumours about its history. But I became tired of hearing the things I knew could not be true because I have done so much research I can tell what is pure fiction. So I decided to go to the Wiltshire and Swindon History Centre and look for the truth.

We know our house is old, but we have no idea how old and so that was where I began this journey, searching back through the information about who had previously owned our house. So, initially, I was looking for the story of my house and then it became the story of the village green.

What I knew before I went to the records centre is that our house has been around since 1786 at least, because an artist, John Baptiste Malchair, drew our house in 1786.

The image was drawn from the parlour of the vicarage on the far side of the road from where we are. The drawing below was sold by Sotherby’s a few years ago but we do not know who bought it.

I have a list of some owners of our house after this date, but I did not investigate from the current date, back. I was mainly interested in who owned the house at the time this image was drawn, and who had owned it previously. When was it built? Why was it built? What did the owners do? What was the village they had lived in like?

The first stop in my search was the Articles of Agreement for the Commutation of Tithes in the Parish of Poulshot, a document from 1837.

This document shows that Rev. David Hopkins owned our house, a nearby house and quite a few fields (I found out from his will that the land was 165 acres in total). Our house and the attached orchard, were being rented by John Gilbert, while Edward Gilbert rented a property named Manor Farm and the fields.

The houses and land stayed in the Hopkins family for another generation, and then remained in the ownership of a mother, then a sister. The land and property were then split among more distant relatives.

Below is a map of the land the document above describes but this was drawn in 1874 when the land was sold by the Hopkins estate.

The village green is the area called ‘common’ on the image above, and the house we

own half of, is at the bottom of the village green.  Plot number 283, homestead and garden. At the time the occupants of our house were also leasing plot 284, the orchard.

Before I progress, note that the 1874 map shows you what was owned by the Hopkins estate, not other properties. Ours was not an isolated house, other houses had been built about the green. In fact there were five farms in positions around The Green.

These maps told me something more than just that the house was let as part of a larger estate. Where the dotted lines run past the front of our house, is now the main road through the village.  Years ago houses, unless there was a reason to travel to them, were built on the roadside. They did not build closes, and estates. Houses were always on the edge of some network that connected them to daily life. A road. A canal. A river. A green But as you can see from the 1840 map, our house, is at one end of the green and it stands out on its own, that is when you realise it was not built on a through road. Our plot of land closes off the green.

This first step in my story told me two things about our village myths straight away too. All around Poulshot are what is known as the Green Lanes. They are really wide byways and bridle ways. I have lived in a few villages, and walked around many, and I have never seen track ways between fields as wide as these.

I have asked some of the other villagers, ‘What is the history of these lanes?’ No one I have asked has been able to tell me. Well, having seen the 1840 map, I now know they were the roads. Carts and carriages would have travelled around the village green behind the properties, on this main route. The road through the middle of Poulshot as we know it today was simply not there. The road across the green does not show up on maps until 1919, but it had not been there even in 1899.

So when did the road appear? Nora Dixon, who wrote about life in Poulshot Village in 2002 explains in her book that The Parish Council applied for a road to be put in across The Green in 1896, and then again in 1905 using a new idea for a reason for a new main road, ‘extraordinary traffic over the roads in the parish by traction engines hauling timber, which caused great injury to the roads.’ The new main road that ran straight through the village and over the village green was laid in stone in 1909 and flattened by a steamroller brought down from Devizes 😀

But, as you can see in the 1786 drawing, above, there was a narrow pathway across The Green before the road existed. This was a cobbled track and is still buried under the grass. It was (and still is) claimed to be a pathway put in place by Monk’s and I am told it goes all the way down the hill to the village church.

But not everyone believes that is true.

Anthony’s Walk (Vol, v, page 374) “There seem as always to have been a strong tendency to connect any old track or causeway either with monks or nuns. A walk near Warminster, known as the Nuns’ Pass, was in 1777, the subject of a descriptive poem of 35 pages, and very recently when the question of relaying part of the time-worn causeway some two miles in length, which travers the village of Poulshot, was introduced to the Urban District Authority at Devizes, it was at once identified as an old Monk’s Walk, in accordance with usual tradition.”

It makes far more sense to me that the cobbled track was put in because while carts and horses would have used the roads and travelled around the edges of the green, (although in those days roads were no more than mud tracks). In the watercolour painting below you can see what those tracks may have sometimes been like. Travellers who were walking or droving animals to market, may well have there taken the short cut over the green. As would the locals. As recorded in a letter from John Aubrey (1626-1697) Poulshot was a ‘wet and muddie place’. (An aside: I have loved the fact that most of these records are pre-Victorian and therefore pre the inventions of exact spelling and grammar; so refreshing for someone with dyslexia). So why not build a pathway that means you can keep your feet dry. The leather shoes of history, would have been no match for persistent damp and mud. Which is why people wore metal or wooden clogs called patterns underneath their shoes when they went outside (otherwise in the towns they were likely to step in animal or human waste while in the country it was mud).

A painting by Diana Sperling in the early 19th Century

Clogs held by the Victoria and Albert Museum

I would not like to have to balance on those when it was icy, and I do not think they would have been much use on a muddy track turned into a quagmire by the rain in winter, as Diana Sperling showed by her painting of her life experience. No, a much better idea to put in a path.

The last thing to say in this post about the village is to give you another example of a potential old path used to keep feet dry.  I cannot share a picture of the cobbled path that runs across the green,  but here is an old brick path that we found a couple of feet down in our garden when we built our extension. This runs towards where we know our outdoor toilet was, and it was at the same level as the original foundations of the house. So perhaps it went to the toilet… or you never know perhaps it is a continuation of the Monk’s path. 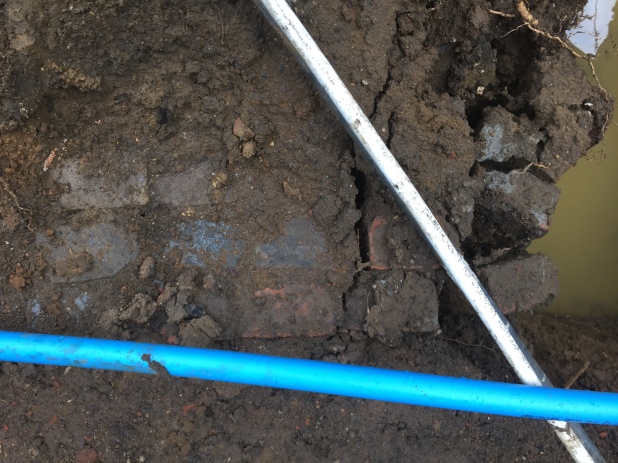 There is a lot more to be said (obviously), I have barely scraped the surface of this story, but for today I will give your eyes a rest.

Thank you for joining me in this historical investigation/adventure. I have felt a little like a time traveller in the days I was immersed in this research.