We visited Belton House in Lincolnshire in September 2011, and the folly there was the height of Romance. Although I discovered no grand stories about it I just loved its charm.

Set at the end of a long avenue – a room with a view – not a very tall tower but placed on a hill that proclaims to give sight of seven counties.

It is set in a beautiful aspect, at the end of an avenue, both to look at from the windows of the house, and from the folly back towards the house. There were deer grazing in the park.

Belmount Tower was built between 1749 – 1751, and originally had two further arches either side of the central arch, these were removed in the later 18th century on the advice of Lord Brownlow’s brother-in-law, Philip Yorke.

The building is surprisingly narrow, but internally contains a spiral staircase leading to a room above, from which the views can be enjoyed. 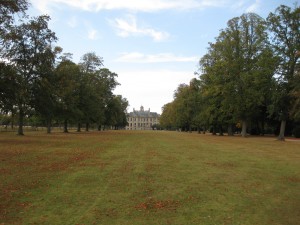 We know that Lord Brownlow used the room for entertaining, he even dined there,  having a meal transported from the house to the tower. The servants must have transported the dinner in carts. It’s quite far from the house.

It looks like a fabulous entertaining space, people must have felt very decadent sitting in a room with views from every angle as though you were up on top of the world.

I recently went to another folly used for dining, on the Rievaulx Terrace, in Yorkshire. This Palladian style  folly was established as a permanent entertaining space, and better equipt, with a cellar beneath for storing wine and cooking. Its over a mile from the house so there was no chance of transporting a hot dinner.

The whole platform it’s built on could almost be called a folly. 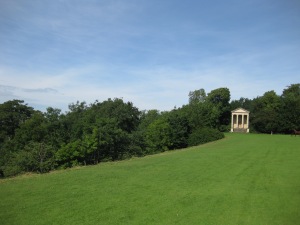 The bank of earth was built up on a natural hill above the ruins of Rievaulx Abbey, so guests may stroll from one end to another and enjoy the view of the Abbey ruins framed by carefully planted trees.

Imagine this on a Christmas day, dusted with snow, and then taking your Christmas dinner in the folly, which was as fabulously decorated as any house. 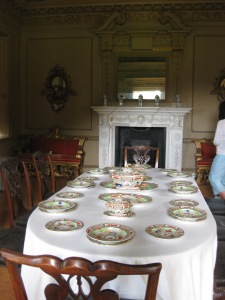 Views from the terrace;