Like the last house that I wrote about, Chastleton House, Swarthmoor Hall has a particular charm.

When you look at the front door that you walk up to now, Swarthmoor Hall does not look at all grand. It just looks like a large house. But this large house was originally an Elizabethan Manor and it has a very special story and a wonderful atmosphere.

It has changed a lot since the picture on the lower left side, above. But the setting of the property, on the top of a hill in northern England, near the coast on the edge of the Lake District, gives it a very Brontë Sisters feel.

But it is not only the position of Swarthmoor Hall, it is also the stone flags on the floors and the dark wood panelled walls. It has the look of a set from a Brontë Sisters story. A middle class home. With large drafty, cold rooms. With dark corners, and flickering candle flames.

But unlike a Brontë Sisters story, this house has a wonderful sense of peace. When I say Swarthmoor Hall has a special story, it has a claim to an important step in history. The Quaker movement began at Swarthmoor, and the family took their religious beliefs to Pennsylvania and began the Quaker movement there too. Perhaps that is why it feels so peaceful. 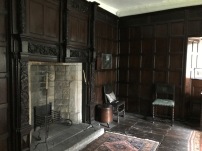 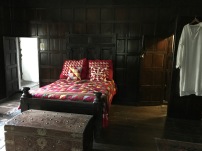 Compared to Chastleton House, Swarthmoor Hall has a sense of being a home. A peaceful welcoming home. So, when I walked around Swarthmoor Hall, in my head the lost-in-time house for my character, that had first come to my mind at Chastleton (in a stark, almost lost, property that reminded me of Miss Havisham’s home) became a quiet peaceful place that oozed love from its dark panelling. Every room became a room that my character would think was precious.

You will spot some direct reflections in Treacle Moon, for instance, the Porter’s Chair. The hooded chair in the top left picture. I sat in the chair, and it had a very different feeling sitting in a enclosed chair that protected you from the drafts and felt like it hugged you.

I love old staircases too. The shallowness and width of the steps. The way that steps have been worn down by use, and the imperfections of staircases in the oldest houses. The number of times I try to capture what old staircases look and feel like in books, and yet I never feel as though I quite express it for someone who has never walked up them. But, hey, stairs do not play much of a part really.

The hallways, though, and the transfer from room to room, express a very different atmosphere from the atmosphere in a stately, grand, home. The halls and stairs I usually depict are lined by echoing marble and polished stone or wooden cantilever staircases wrapping around walls in large rooms. 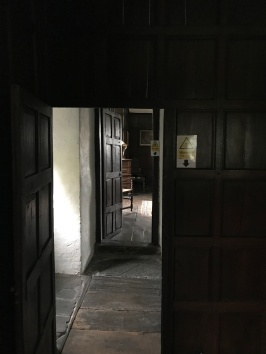 Of course Swarthmoor has another special point of interest in the hall, graffiti on the wall. Graffiti that has no story behind it, anymore than any other name that has been carved into a wall. Except that this was carved in the wall of the hall, in a period when the property was lived in.

So this is the property that turned my character’s house into a home. A place that is loved and kept locked in one point in time because they could not bear to change a thing, not just because of poverty.

Just one more house to tell you about, next week. 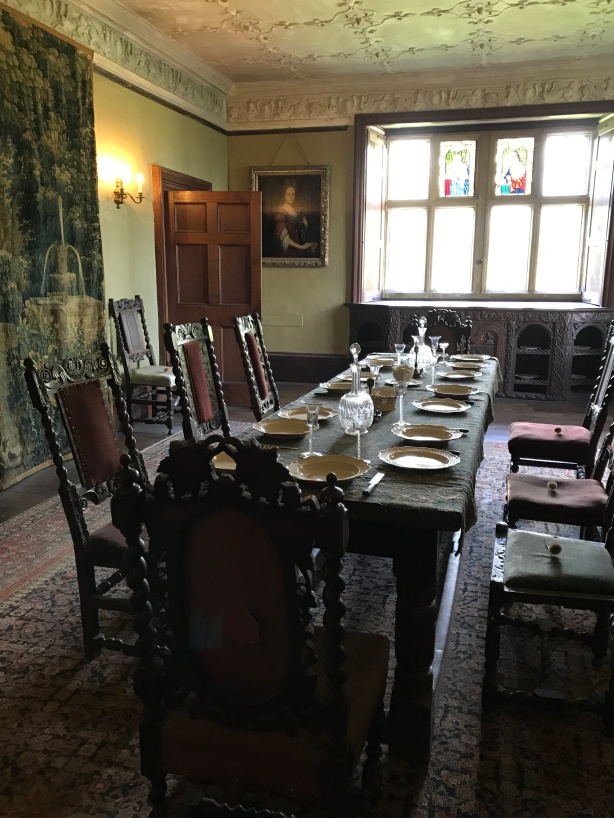 I have to be quite careful with this, in that I do not want to giveaway any spoilers as Treacle Moon is not out yet. But I want to share some of the houses that inspired me to think about the lifestyle of one of the characters. I shall not say which character, because that may giveaway a plot line 😀 .

Having heard about the houses, though, you will be able to spot the connections to reality when you read the book.

The first house that began firing my imagination is Chastleton House . Chastleton House is situated in a very quiet, tiny, sleepy little village nestled amongst the Cotswolds hills and it has a rare and particular charm.

The National Trust only took over ownership in 1991, and when they took over the management of the property, they discovered a 400 year old time capsule.

The property does not belong to a stately family, it is basically a very grand Jacobean farm house. The family member who built the property was a wool merchant, and he had his eyes on progression. He built a huge country house between 1607 and 1612 to display his wealth and status in the hope that, as it had for many others, it would draw some recognition his way and he would acquire a title. He did not succeed in winning a title although the family mixed in such circles.

Then, later during the 1600s family members held noted positions in the Royalist army. They were so close to Charles I they have his bible in the house, as well as other memorabilia of that time that helps to teach children about Charles I’s martyrdom. But yet again, they did not receive any formal recognition for their service and dedication.

But at the end of the 1600s the family became impoverished. Yet their loss, is today’s gain. Most stately homes have had their Jacobean characters hidden behind Georgian facades, knocked down or stripped away. The Georgians were the most prolific for changing their homes; putting on new fronts, ripping off panelling and papering the walls instead. Taking out roofs and adding ornately decorated ceilings. I love the Georgian decors, and this is what I usually picture and describe in my books, but this house, with its lost-in-time charm, was something that captured my imagination in a different way.

It is so Miss Havisham. Yet, not.

But, as I said, it does not really fit Miss Havisham, because it seems a loved and valued place. A home. A house that could speak a million stories if it could talk. Everything that is 400 years old has been used and treasured for 400 years.

The last family member to own it until 1991, was a spinster. She lived in the huge house alone, and her world had narrowed down to only a few rooms. With 15 cats for company, who kept the mice and rats under control. She lived her life tucked up under blankets in the huge house because she could not afford to heat the rooms. But she was still happy and proud of her family house. 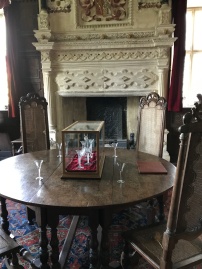 So proud she gave it to the National Trust charity to preserve it.

One of the most special rooms in the house, though, is the long hall in the attic, that was used for exercise. I have often seen this in properties remodelled into a portrait gallery by the Georgian relative, and I have included such halls in other books. But this hall is in a farmhouse! Middle-class country families are not normally so extravagant with living space and the money it would have cost in the additional building of the space is exceptional for a merchant.

So, to me, Chastleton immediately became both a place and a way of life that I wanted to capture for a character in some way.  You will of course find out my twist on this in Treacle Moon…

I will tell you about the second house next week.